To learn more about ELEPHANATICS, here are a few different pieces we’ve been featured in:

Celebrities Posting for our Make It A Million campaign (MIAM) on SM – World Elephant Day Aug 12, 2020

August 12, 2019 – Globe and Mail, Jane Goodall op-ed discusses the necessity of Canada to become an #IvoryFreeCanada

Elephanatics interviewed on City TV in reference to letter to the Canadian Government asking for a ban on domestic trade in elephant ivory –  Tom Walsh, Video Journalist – March 17, 2018:

Elephanatics President, Fran Duthie, quoted in article on elephant trophy decision to lift a ban on importing elephant trophies from Zimbabwe and Zambia:

Listen to Dr. Chris Shepherd, who worked for TRAFFIC as a regional director for SE Asia for 25 years, as he discusses the perils of the elephant and the rhino and many other animals – CKNW News Talk AM980:

Leanne Fogarty, Director of Education for Asian Elephants, was interviewed on Roundhouse Radio FM983, April 18th, 2017 on why NOT riding elephants is the right thing to do. Plus, she wrote a detailed list of ethical camps to visit while on vacation in Asia. Listen to her interview – http://bit.ly/2nZXej6

For a list of approved elephant sanctuaries and a petition to sign please visit our blog: www.elephanatics.org/blog/

Elephanatics hosted the 3rd annual Global March for Elephants and Rhinos September 24th 2016. Patricia Sims, speaker and founder of World Elephant Day, was interviewed: Please see clip below. Our segment is at 9 minutes 25 seconds. (CBC deletes data after one week.)

Andrea Duthie, Co-Founder and Chief Programs Officer, is interviewed by UBC’s paper, Ubyssey. Elephanatics is hosting the annual Global March for Elephants and Rhinos September 24th, 2016, for the third year in a row. She discusses the issues surrounding the need to bring awareness to the crisis facing the elephant and rhino here

Listen to an interview by Fran Duthie, Co-Founder, Elephanatics, on radio station 100.5FM, Animal Voices, The Elephant Show. She discusses the ongoing poaching crisis and her role in educating the public  here

Dr. Jake Wall works together with Google to create GPS satellite-tracking collars to locate elephants and monitor their movements. This system helps with the poaching crisis  here

Elephanatics was mentioned in the New York Times  in May of 2016 for our participation in Vancouver Fashion Week.

Local NDP MLA, Mike Farnworth, did a private members bill and mentioned us in it here.

We did our first ever Flashmob in 2014 and our local News 1130 interviewed us afterwards.

Jane Macdougall, a journalist for the National Post, did a write up on us after the 2014 GMFER.

Christina Toms from Elephanatics moderated a discussion panel at the screening of the documentary ‘When Giants Fall’, which won Best Documentary at the Vancouver Women in Film Festival. You can read the report here.

Clips from the panel discussion:

Below is a “Meet the Neigbours” write up in the White Rock Sun featuring our own, Fran Duthie. 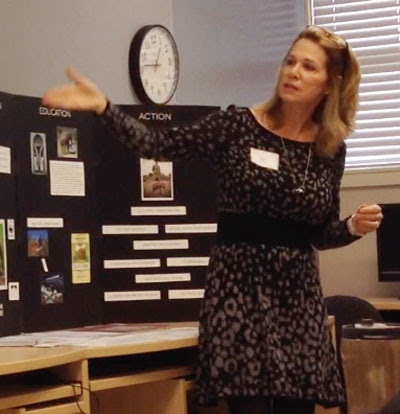 White Rock’s FRAN DUTHIE talks about her inspiration to create an organization to work against the slaughter of African elephants and rhinoceros’ for their prized ivory tusks.

ELEPHANATICS? Fran please tell us the work your group is currently doing?

We are currently working on the upcoming Global March for Elephants and Rhinos, Oct. 3rd and I am working on some awareness campaigns within the community and Vancouver. We are also working on raising awareness in Canada to ban wildlife performances in circuses.

How did you come to create Elephanatics. What was the tipping point for you personally to become involved.

I founded Elephanatics, May 2013, with a couple of other equally concerned folks who have witnessed the consequences of poaching firsthand. I had been reading a lot about the crisis and decided I wanted to try and bring awareness to this issue so I reached out to a PhD candidate at UBC who works for Save the Elephants, a large NGO in Africa, and together we formed our group.

You and ELEPHANATICS do work with school children. Could you explain exactly how you engage with children.

Kids love learning about elephants and how important they are as a keystone species. I have written a power point presentation on poaching for younger grades 2-5. I incorporate a book which tells a story about an orphaned baby elephant whose mother was poached. I then ask students questions about the book and encourage discussion about what they have learned and what they knew about the poaching issue before I read them the book. I deliver my presentation about poaching afterwards. I do this in a non graphic manner and make the learning process as fun as possible given the topic! I bring in different materials for students to take home regarding the elephant and I have made place mats for kids to colour with elephant facts on one side which they can laminate and take home to use. I own a few pairs of elephant ears which the kids love to wear during the lesson. By the end of the hour the kids have had some fun learning about a critical crisis and hopefully they take that knowledge home to share with their parents.

FACEBOOK and other media are full with messages about the inhumanity we exert towards elephants in captivity and the harvesting of ivory from their tusks. What can we do?
We CAN STOP buying ivory trinkets or anything with ivory in it when we travel abroad to places like Thailand, Vietnam, China. We need to cut the supply and demand of ivory. We CAN NOT ride elephants or support any of the tourist industries where elephants are broken and we CAN NOT support circuses. Our website has a list of ways to help stop cruelty to animals and share information about the poaching crisis.

Speaking of FACEBOOK I just saw something today where concerned groups are now spraying dye on the tusks of rhinoceros and elephants. Is this feasible and does it actually stop the senseless poaching.

This is an idea thought up by someone who has not looked very closely at the problem. An elephant tusk is a modified incisor. Just like our teeth an elephants tusks are alive. They are embedded deep in the elephants skull and contains a very large conical pulp cavity with tissue, blood and nerves. You can saw off a portion of an elephant’s tusk, if you are careful not to expose the pulp cavity, but if you did so you would still leave a very large chunk of ivory inside the elephant’s skull. This is why you see such gory pictures of elephants after being poached. They need to cut off a large part of their face in order to reach the rest of the tusk. Dye would and could not reach the rest of the tusk inside it’s head. The incisors grow 2 cm a year. So trimming off or dyeing the tusk would never be a permanent solution. There are arguments on whether it would help prevent or spurn more poaching.

Are the tusks of elephants and rhinoceros harvested for natural health supplements by some poachers or is it simply the ivory they are after?

Yes, there is wide belief in certain countries that rhinoceros horn can solve many health issues. Rhino horn has no medicinal benefit whatsoever, but the slaughter continues regardless the campaigns that have shown that rhinoceros horn is made of keratin, just like our teeth, and does nothing to solve headaches, food poisoning, typhoid or any of the other claims given it.

There is a public march planned for Vancouver in March. Do you have information on the event?

Elephanatics is hosting the second annual Global march for Elephants and Rhinos.
In addition to the poaching aspect does ELEPHANATICS oppose elephants being used for entertainment in zoos. Is this problem on the rise or decline?

As an advocacy group we look at all aspects of elephant abuse. We have a detailed list of ethical tourist destinations to visit when travelling abroad. One of our members has started a country wide ban on a circus travelling across Canada at the moment. We were pleased to see Ringling Bros. and Barnum & Bailey Circus phasing out elephant acts by 2018 amidst growing public concern about how their animals are treated. Awareness is reaching the masses!

As a resident of the White Rock area, people often ask me why we should be concerned about the elephant. My reply is simple. We live in a world where everything is globally connected. A large number of crime syndicates fund their attacks with money derived from the sale of ivory. A retailer was caught in Richmond selling ivory illegally and the Internet acts as an easy conduit for selling and purchasing ivory anonymously. Educating the public about where ivory comes from and why people must say – ‘NO TO IVORY’ – is key to help cut the supply and demand.

We are always looking for compassionate volunteers to help continue our goal of raising awareness. Please see our website for volunteer opportunities and application forms.

Thank You For Your Support Donate to Elephanatics